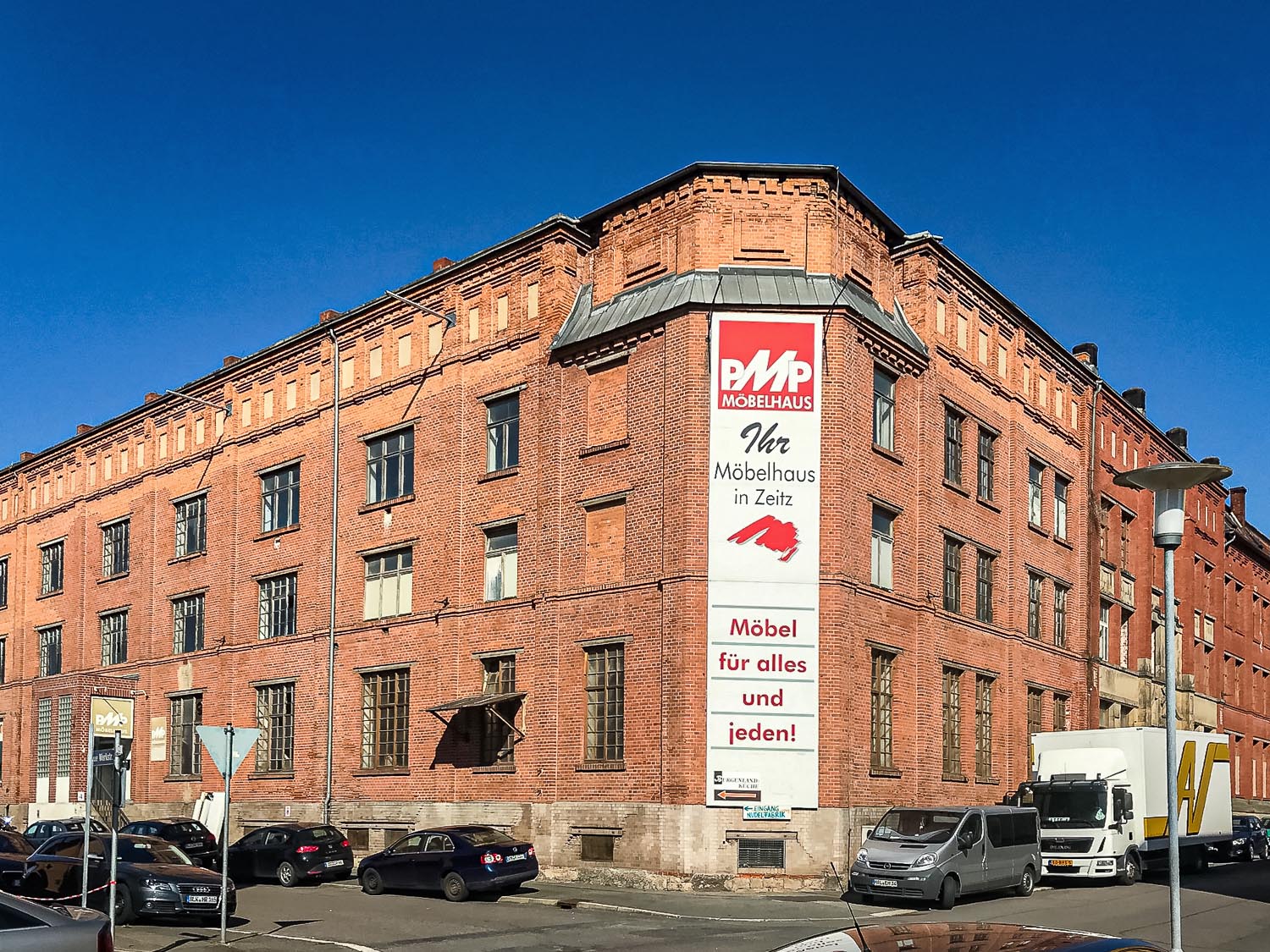 Zeitz is a medium-sized town (28 000 inhabitants) in the district Burgenlandkreis in Saxony-Anhalt, about 40 km south-west of Leipzig. Although the town has an over 1000 year long history as residence of bishops and dukes it is particularly marked by its industrial legacy of the 19th and 20th centuries. The development during this time is closely connected to the lignite mines between Zeitz and Leipzig of which two are still active today. Main industrial branches until 1990 were mechanical engineering, piano manufacturing and the sugar production. Particularly relevant was also stroller manufacturing by the enterprise VEB Zekiwa which was particularly strong in exporting its products to both East and West of Europe. The former importance of this industry is still visible today in the stroller museum in Schloss Moritzburg.

After 1990 – Loss of economic and political importance and demographic change

After the German reunification, Zeitz was severely hit by processes of deep deindustrialisation. Almost all big enterprises closed down leading to massive unemployment in the town and the surroundings (more than 30% in the mid-1990s). Only Südzucker (sugar and bioethanol plant), Goldeck/Zetti (food manufacturing) and MIBRAG (lignite mining – with its 2000 employees being one of the most important employers of the region) survived until today; the location of the former hydrogenation plant has become the “Zeitz Chemical and Industrial Park”. In the core town the number of industrial enterprises decreased by more than 50% from 52 in 1995 to 25 in 2001. Since then, the number is stagnating. Only few manufacturing enterprises restarted activities after 2000. Today, handicraft and service-oriented enterprises are the backbone of Zeitz’ economy. However, industrial heritage sites such as the coal briquette factory “Hermannschacht” and a high number of industrial brownfields which have witnessed the times of Zeitz’ industrial prominence leave the hope for a new industrial future of the region.

In addition to the economic challenges, Zeitz lost its status as district capital (and with it its administrative importance) after the territorial restructuring of the federal state of Saxony-Anhalt in 1994. Apparently, Zeitz is still struggling to redefine its role and identity in this constellation (as also stated by the urban development report of 2010). This includes also the integration of the surrounding villages, which were administratively incorporated in the town in 2009 and 2010, and partially still struggle with the central administration in the core town.

The decrease of Zeitz’ political and economic prominence has been accompanied by a considerable shrinking of the local population from almost 50.000 inhabitants in 1989 to 28.381 in 2017. Since 2012, the decrease rates have lowered with a positive migration balance from 2013 to 2016. In 2017, in-migration numbers were considerably lower than the years before, a trend for the future remains to be seen. However, the shrinkage of population is also paralleled by considerable ageing of the population. Today already one third of the overall population is 65 years old or older.

One consequence of this severe population loss is a great number of vacant, and dilapidated houses especially in the inner city (in the former urban development plan described as “Schrottimmobilien” – “junk properties”). Although the housing stock has been reduced during the last years, especially in the quarters with GDR-built panel houses (i.e. Zeitz East), the need for redevelopment and refurbishment is more than visible in the urban landscape. Moreover, also the retail sector in the inner city needs to be supported as it lost much of its importance in the 1990s when bigger supermarkets and retail centres were built at the outskirts of the town.

Seeking a new identity – Zeitz between industry and culture

Following the loss of its industrial importance Zeitz has been searching for a new identity and orientation since the mid-1990s and even stronger since 2002 when the process of urban restructuring („Stadtumbauprozess“) started. In this regard, the town has pursued a two-fold strategy: on one hand, it emphasises the importance of the economy and especially the still existing industries and, on the other hand, it aims at promoting the historical and cultural assets of the town, such as Moritzburg castle, its surrounding garden, the cathedral, the old Franciscan monastery, the subterranean passageways “Unterirdisches Zeitz” and the old Benedictine monastery Posa.

In 2004, a first step of revalorising Zeitz’s cultural heritage was taken by organising the first Landesgartenschau of Saxony-Anhalt (State horticultural show) which improved the area around Moritzburg considerably. Not only the garden and park around the castle was affected by this event but also six historical buildings, which could be renovated and are used nowadays for different purposes (culture, sports, administrative). However, the touristic effect of the Landesgartenschau and the other touristic sites has remained rather limited. Up to now, most of the guest-nights in the region are stays of technicians and business people working here rather than touristic stays.

In contrast to this top-down driven development of the cultural assets, cultural bottom-up initiatives emerged in recent years that want to valorise the proximity of Zeitz to Leipzig being a hotspot of the creative industries in Eastern Germany. In 2013, a group of young people (some returning residents, others coming from elsewhere) took the monastery Posa on a 30-year lease to establish it as a place for education and culture and revive the cultural life of Zeitz. During the last 6 years, the monastery has become a node for different bottom-up cultural activities in the town and the whole region (i.e. Open Space Zeitz, Art House Zeitz in the old library, Kulturwerkstatt Burgenlandkreis). As such, it has gained even national attention, i.e. through funding by the German Federal Cultural Foundation or the Robert-Bosch-Foundation or by media contributions, i.e. in the German public broadcasting radio station Deutschlandfunk or in the weekly newspaper Die Zeit. Another private initiative is the development of the former noodle factory close to the railway station. Here, a coworking space, Virtual reality centre, and accommodation have been established. Also the city administration is taking up these developments and will soon open a first coworking space in the city centre.

Economically, the town aims at taking up an industrial development path with biochemical and manufacturing industries glancing also at the chances of the creative industries. Still today, the administration aims at attracting major investments in industries with a high added value and qualified employment opportunities which would keep the youth in town, albeit with limited success. One strategic thought is to develop the chemical and industrial park further but also to cooperate with other municipalities and benefit from spillover effects from Leipzig.

Zeitz as seat of a big mining enterprise will be particularly affected by the proposed end of mining by 2038. For this reason, Zeitz gained increasing attention by policy makers and media alike and the administration aims to channel a considerable share of the funding available for restructuring measures to the town and develop a sound strategy how to shape the town’s future.

Nudel: From an old noodle factory to the multifunctional art center

Being built in 1909 in an industrial area the “Nudel”, a former factory produced noodles and rusk until 1990. As many enterprises the factory had to close then and was long one of the many “lost places” in Zeitz. Since 2017, the former factory is developed by Birgit and Mathias Mahnke as an art and virtual reality centre. By developing the building step by step on rather low budget the couple uses the industrial charm of the building and the relatively low costs to attract artists from nearby Leipzig and beyond. At the moment, the building comprises a coworking space, a virtual reality centre, studio rooms for artist and some few loft apartments. Nearby, you can find more accommodation in smaller rooms in a former hospital which is also led by the Mahnkes.

Places of interest in Zeitz:

We will only contact you with information related to CORAL-ITN. Your personal data will be processed in accordance with the provisions of the General Data Protection Regulation (GDPR) Regulation (EU) 2016/679.

This project has received funding from the European Union's Horizon 2020 research and innovation programme under the Marie Skłodowska-Curie grant agreement No 955907.